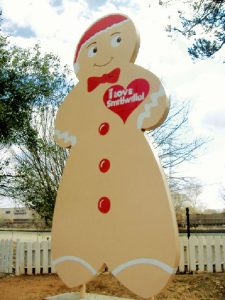 The gingerbread man has symbolized Smithville’s Annual Festival of Lights celebration for many years, but in 2005 one of the event organizers had an idea of how to bring our beloved symbol its “just desserts”!   Why not bake a huge gingerbread cookie – in fact, the world’s biggest – to show the world that Smithville thinks big!

So after a year of experimenting with recipes, calculating the outdoor baking conditions, creating a giant cookie sheet, and gathering the needed sponsorships and ingredient donations, the gingerbread man became a reality on December 2, 2006, at the 16th annual Festival of Lights celebration.  He weighed 1,308 lbs, 8 oz and measured 20 feet from head-to-toe.  He consisted of 750 lbs of flour, 49 gallons of molasses, and 72 dozen eggs (separated!).  He was baked over a dump truck load of charcoal before being raised by crane to an angle of 65 degrees in order to qualify for the Guinness World Record. 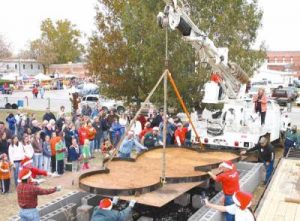 The staff at Guinness officially recognized the feat in 2008, and included Smithville’s accomplishment in its 2009 edition (pg. 124).  In honor of being officially named the World’s Biggest Gingerbread Man, the Smithville Area Chamber of Commerce and the City of Smithville retired the cookie sheet that was used to create the giant gingerbread man and converted it into a monument to commemorate the record.  The monument was dedicated on December 6, 2008 at the 18th annual Festival of Lights celebration.

At the 2009 Festival of Lights event, attendees voted to name our giant friend “Smitty”, and a sign was mounted next to him to introduce him to all visitors.  Also in 2009, our World Record was broken by the IKEA Corporation in Norway, but we are still fairly content that the largest gingerbread man in the USA resides in Smithville.  Ever since his 2008 dedication, our gingerbread man has adapted seasonally by sporting magnetic accessories that reflect holiday themes throughout the year.

Pictured above left, Smitty was so large and heavy, we needed a crane to bake him in our outdoor grille.  No worries, the city officials and fire department were on hand.  Pictured above right, he is outfitted for Valentine’s Day, although the sentiment written on the heart is always true! 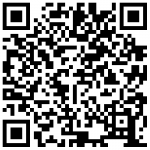 Want to post your picture with Smitty? Just click on the QR code with your cell phone to go to the facebook page and post away.  Don't forget to tag everyone in the photo!